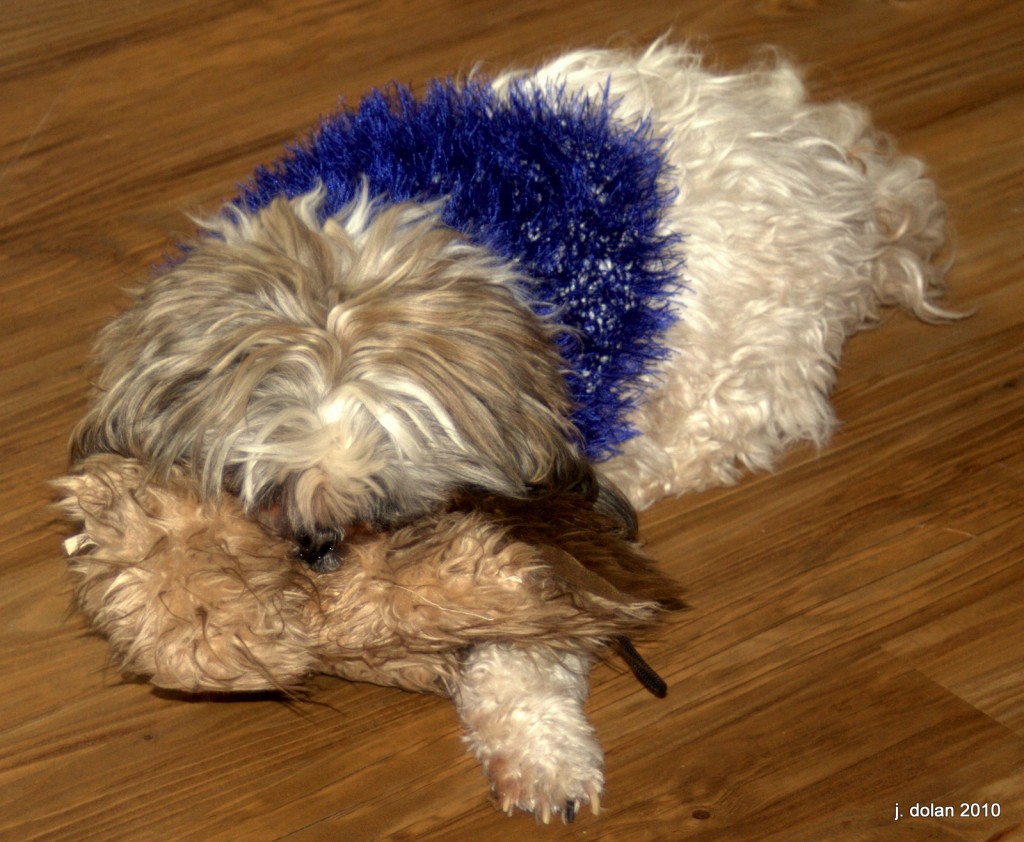 In just about another half hour Akiva will be 7 years old.  He he sleeping on the floor here next to me while I work on the computer.  He had a pretty good day, it was his first full day on the new pain medicine.  I think it did make him a little more comfortable, but it wasn’t as big of an improvement as I had hoped for.  He had ground beef for dinner, raw, and ate about 4.5 ounces of it.  I had a new supplement on top of it that is for joint support.  It is kind of a liver gravy, he seemed to like that.  It also had his cod liver oil and Metacam mixed in.  He took his Desonyl (for liver support) earlier this afternoon.  He was a bit reluctant to eat tonight as he has been, but still managed a good amount (4.5 oz).  Then after he made it clear he was done eating his food, he was all too happy to take all the bites of my steak that I was willing to feed him.  Karen says that if it is something I am eating, he wants it.

I did not feed him his Glyco-Flex supplment yet, I didn’t want to throw too many new things at him at once and decided to wait until tomorrow for that.

We went on a nice long walk this evening, and Akiva rode in the pet stroller.  He does quite well in there.  He whines some times, but not too much, he must be kind of sad that he can’t be out walking with the other dogs, but I don’t think it bothers him too much, he is just happy to be with me.

Akiva has 2 new stuffed toys he is getting for his birthday tomorrow, and has a couple new packs of dried salmon treats.  I think I will cook him up something to eat tomorrow, as he seems much more excited about stuff that is cooked.

So overall it was a pretty good day for him, no real problems other than the reluctance to eat, but we worked through that.  I spent some time on some new groups today discussing Akiva and his condition a bit, I am getting some suggestions back from people about the kind of exercise he should do and related topics.

Akiva and I are going to go to bed here in just a few minutes, Goodnight.

If you read this, leave a comment wishing Akiva a Very Happy Birthday Tomorrow.

This entry was posted in Uncategorized and tagged akiva the dog, birthday, dog. Bookmark the permalink.