In todays issue of USAToday, an article entitled “Trendy pet diet sparks online demand for wild game” was published. This article discusses how some raw feeders are illegally purchasing wild game. While I doubt this is happening all that often for pets, it sounds like it does happen. They group their statistics with other cases of illegal buying and selling of wildlife or raw game meat by stating that “some of it (is) for pets.” 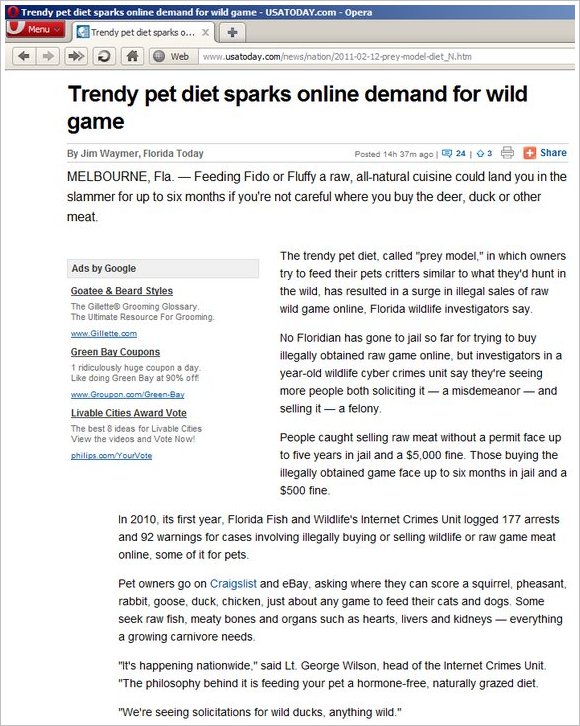 They go on to warn;

Quoting the article: “An Internet search shows some who adhere to the prey model tap ethnic markets, looking for organs, or small, independent grocery stores, seeking turkey necks and chicken backs.” I’d say based upon my experience that the vast majority of people who are raw feeders are buying or obtaining meat from legal sources. I’ve never even comes across a discussion, even on private lists that hinted at people obtaining meat that was illegal.

The Florida department of Fish and Wildlife said that so far, they have only issued pet owners warning, but “Wilson said. That won’t last forever.”

In most area, as far as I know, wild game can not be bought or sold. If you do intended to purchase meat for RawFeeding that is advertised as wild game, make sure it is from a licensed processor so you know it is legal.

Questions on feeding your pet a raw diet? Leave a comment if you have any questions about RawFeeding!